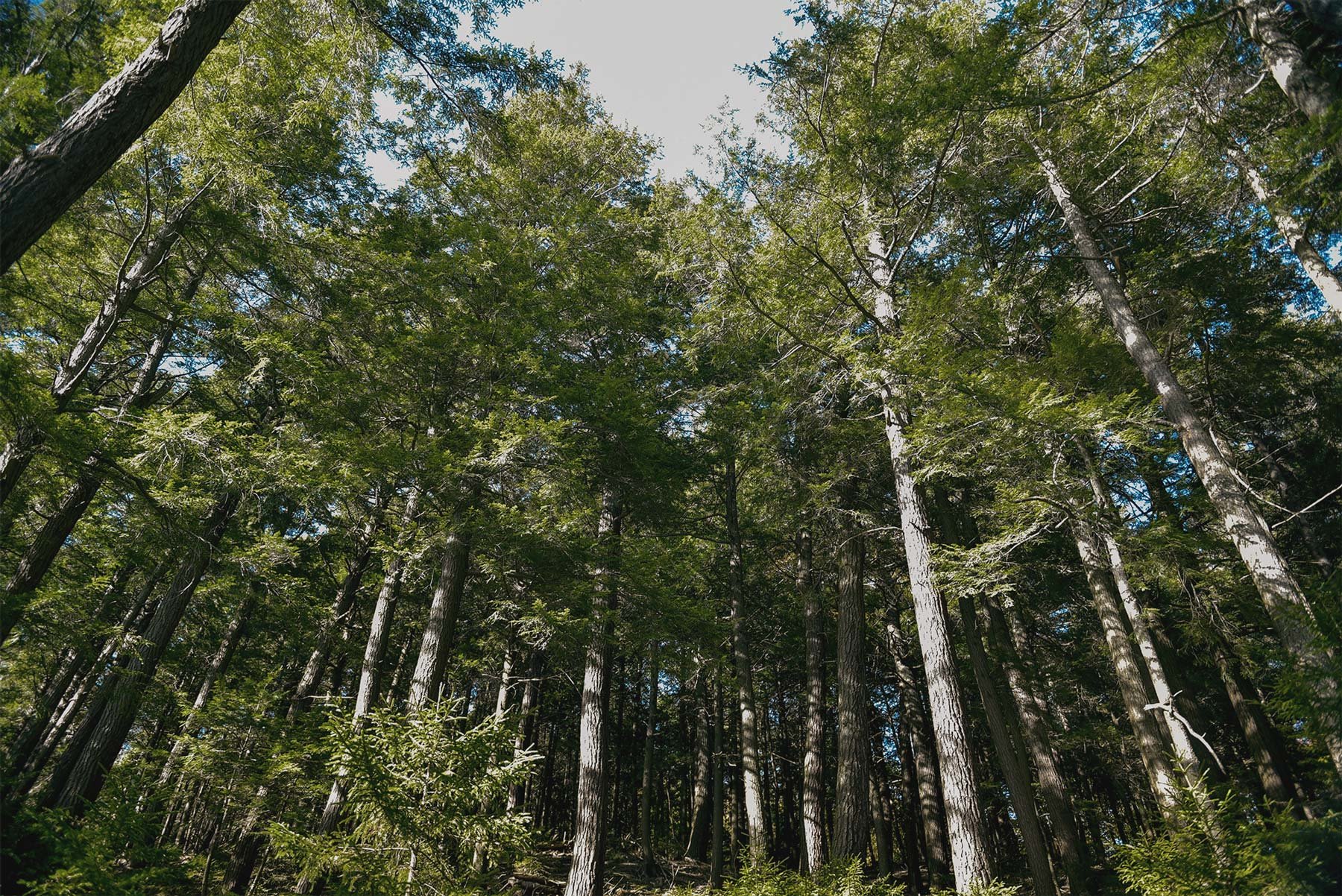 Learn how NEPA might impact your business and how to remain compliant.

A Brief History of NEPA

What Does NEPA Protect?

NEPA vs Other Environmental Regulations

How to Identify the Ways NEPA Impacts Your Project

How NEPA Can Impact Your Infrastructure Project

The National Environmental Policy Act (NEPA) of 1970 is considered the Magna Carta of all United States federal, state, and local environmental laws. This interagency act requires multiple federal agencies to consider the environmental consequences of any action they fund, authorize, or carry out. Projects on federal lands or projects using federal funding are subject to a rigorous environmental review process following the guidelines of the national environmental policy. As an executive order, this act establishes and empowers the Council on Environmental Quality (CEQ) to help protect and regulate our environment.

Each federal agency implements its NEPA requirements differently. Some federal agencies require a detailed NEPA review process, while others have created blanket permits for streamlined NEPA procedures and compliance.

Contact the applicable federal land management agency or funding agency early on in the development cycle to determine the level of environmental review necessary for your project. NEPA environmental review can be a long, complex process that significantly affects the project schedule.

A Brief History of NEPA

Before the 1960s, environmental awareness in the United States was virtually nonexistent. The Lacey Act of 1900 prohibited illegal plant and animal trade, the Antiquities Act of 1906 preserved national monuments, and the Migratory Bird Treaty Act of 1918 was passed in response to over-hunting. Still, the United States had no laws targeting the impacts of human-centered activities on the environment, nor did anyone seem to care.

In the 1960s, following the release of Rachel Carson's Silent Spring (1962), the Cuyahoga River fire in Ohio (1969), and public backlash from the Interstate Highway System, public concern for environmental effects heightened. Decades of increased urbanization, industrial expansion, and environmental exploitation that put many natural resources at risk. Following a congressional investigation into federal mismanagement of the country's environmental resources, President Nixon created the National Environmental Policy Act of 1969 and officially signed it into law on January 1, 1970.

In the Act, Congress stated that "it is the continuing policy of the Federal Government, in cooperation with State and local governments, and other concerned public and private organizations, to use all practicable means and measures... to create and maintain conditions under which man and nature can exist in productive harmony, and fulfill the social, economic, and other requirements of present and future generations of Americans."

These decisions were major federal actions that have set the framework for modern environmental legislation. NEPA implementation has helped protect and save many natural resources, and its work continues today. 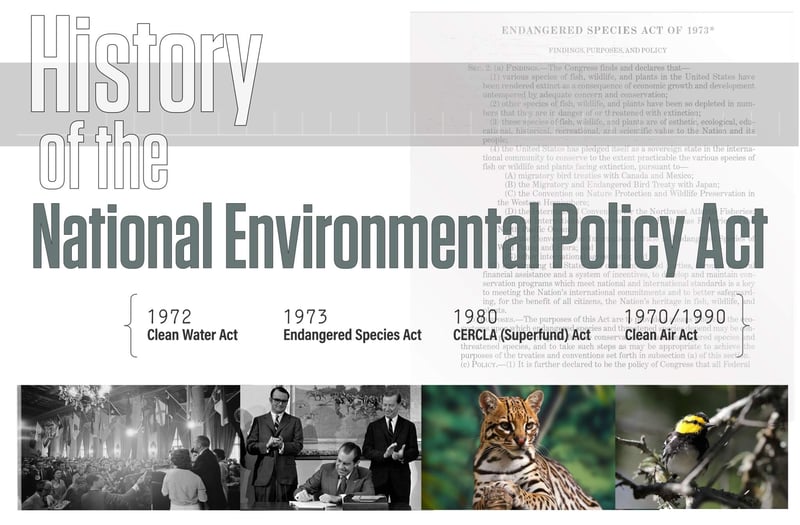 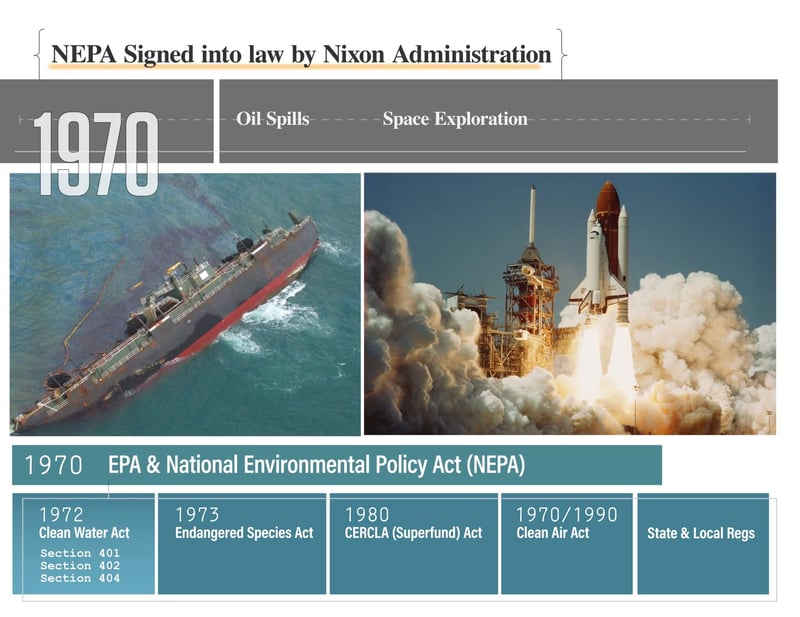 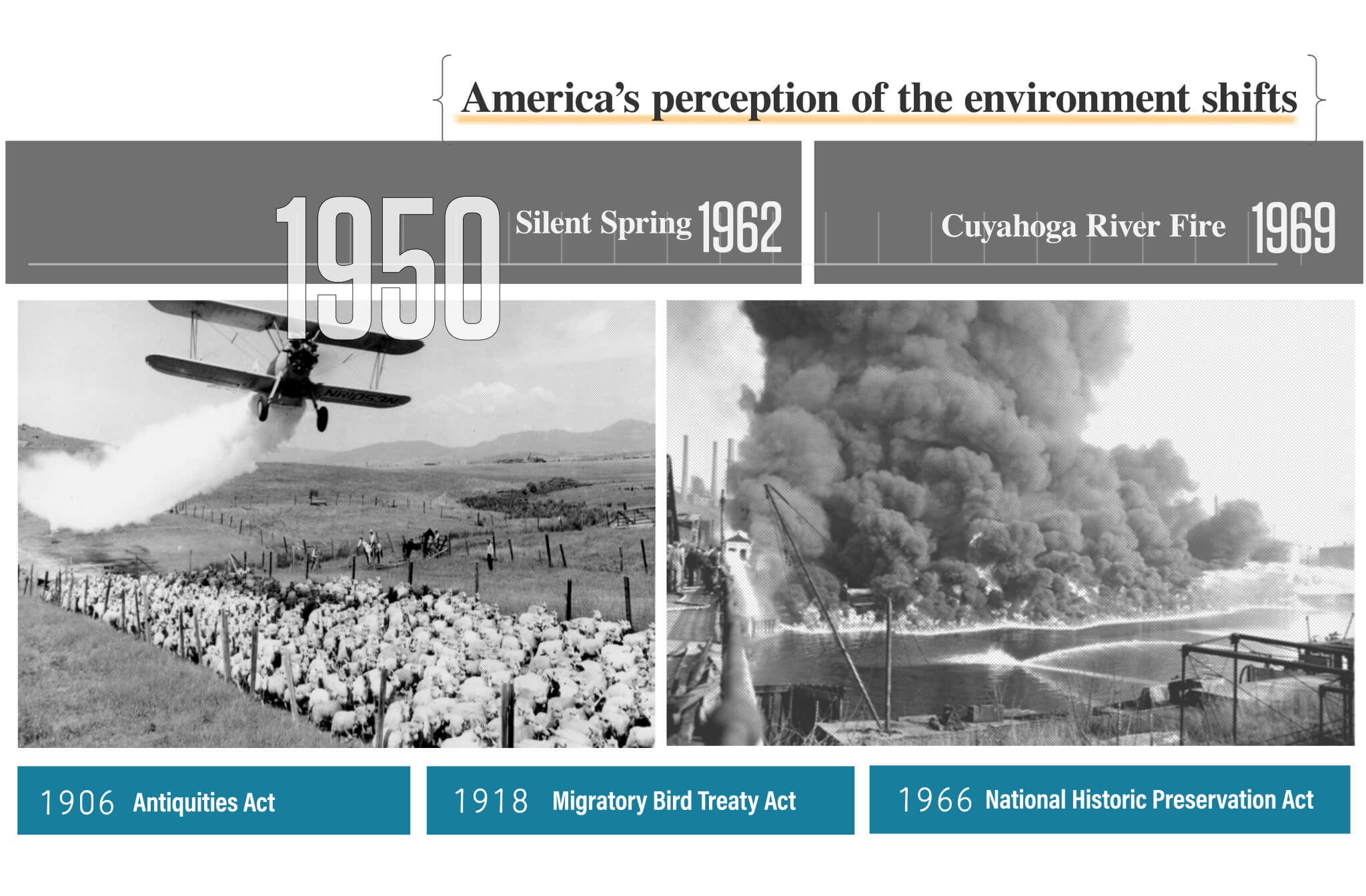 A NEPA analysis determines if a project will significantly affect the environment. This analysis can exist on the following three levels.

An Environmental Impact Statement is required if a proposed project is determined to affect the quality of the human environment. The EIS is the most burdensome NEPA document, with a lengthy 24-36+ month timeline and public review and comment. Federal agencies prepare EISs, and the Environmental Protection Agency (EPA) stores them in an EIS database. This database notifies others when the EIS is available in the Federal Register.

The EIS process ends with a Record of Decision (ROD), which explains the agency's decision, describes any alternatives the agency considered, and discusses any agency plans for mitigation or monitoring.

Specific projects may be "categorically excluded" from needing an EA or an EIS if the federal agency has predetermined that the proposed action does not significantly impact the environment. CE documentation is typically limited to a brief document confirming no effect on sensitive environmental or social resources. Public review and comment are not required.

What Does NEPA Protect?

Individual agencies determine specific guidance and instructions on implementing the NEPA process. However, in general, NEPA requires each agency to evaluate the effects of the proposed project actions to the following resources:

NEPA vs Other Environmental Regulations

How to Identify the Ways NEPA Impacts Your Project

Environmental Consultants are experts trained to survey a project site for a potential environmental impact. These experts are well versed in NEPA regulations set by the United States federal government and state and local rules. Consultants survey a site and provide a report of the project’s risks and permitting next steps. NEPA documentation is typically included in this. This report can take weeks to months to complete.

How NEPA Can Impact Your Infrastructure Project

The NEPA regulation can delay or derail infrastructure projects. Expensive mitigation efforts for resources protected by the act can ultimately make or break your project budget and deadlines. Staying up to date with environmental management laws is critical for project success.

Check out the lists below to find out how our various industry customers encounter NEPA issues: