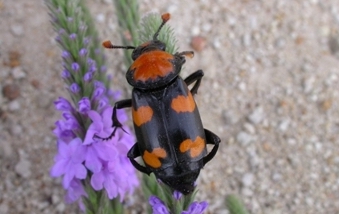 The story of a Bug’s life. Spoiler Alert: it starts with a carcass, leads to a community-wide-near-death experience, and ends in triumph.

According to the United States Fish and Wildlife Service (USFWS), the world is a safer place for the once-endangered American Burying Beetle.

The United States Fish and Wildlife Service (USFWS) decided to reclassify (downlist) the American burying beetle (Nicrophorus americanus) from endangered to threatened on the Federal List of Endangered and Threatened Wildlife. The USFWS finalized the ruling under the authority of section 4(d) of the Endangered Species Act, which provides necessary and advisable measures to conserve the American burying beetle.

The American Burying Beetle was initially listed as endangered in 1989. Since then, if you’ve tried to develop a project in either of these regions, you are likely no stranger to this distinct orange and black beetle.

Initially thought to only be on Block Island, Rhode Island, and Oklahoma lands, this rare species has appeared on development sites throughout the years. As this development has led to habitat loss, the frequency of spotted American Burying Beetles has decreased.

The USFWS published the downlisting on the Federal List of Endangered and Threatened Wildlife of the endangered species, the American burying

The downlisting of this endangered species to threatened comes from years of documentation and research on its habitat, population, and viability. Researchers believe the primary decline in the species population was due to the amount of, and access to, appropriate carrion (the decaying flesh of a dead animal) for the beetle’s food and breeding. Being the largest beetle of its type, it requires larger carrion than others to feed and reproduce on. Continued threats to this endangered species mostly come from habitat loss, alteration, and fragmentation from farming and ranching practices that lead to changes in the composition and density of wildlife (its carrion and an increase in invasive species. Land-use changes to cropland and wind energy development are the primary concerns in the northern region, while grazing, silviculture, and oil and gas development continue to stress the protected species in the southern range.

Perhaps the most significant overall threat to the population is the changing climate we are experiencing.  The species has a low tolerance for warmer temperatures, demonstrated by the Northern Region having larger populations and diversity of the beetle. Proper soil conditions for temperature, texture, and moisture are critical for this carrion beetle; it requires moist, sandy loam soils with organic matter. The grounds must be loose enough to facilitate its burying of carcasses and cool enough to prevent rapid decay of the carrion. However, the warmer temperatures we are experiencing in the summer months are speeding up the decomposition rate of the carrion and increasing the beetle’s competition for suitable carrion with flies and ants. Coupled with the changes in precipitation and extended periods of drought, this stresses and even kills the beetle. These impacts have resulted in a species decline in Texas' southern range since 2008.

How This Status Change Impacts Developers

The reduction in threats to the species’ survival has led to downgrading the American burying beetle from endangered to threatened. However, the USFWS is using a 4(d) rule to focus conservation efforts on certain distinct geographic regions to ensure species survival; as such, many projects, especially those in OK, AR, and KS, were previously subject to onerous survey and permitting timelines are no longer subject to those requirements.

A 4(d) rule allows the agency to address specific threats and conservation needs for a threatened species. Since the species’ most significant extinction risks within the foreseeable future are due to changes in land use and climate change, the 4(d) rule promotes conservation and encourages landscape management. The rule emphasizes the northern region, where the species’ long-term success is most likely.

Climate change effects that threaten the overall suitability of this region for the species influenced this decision. These impacts from habitat loss are estimated to occur on a very tiny percentage of land. Therefore, as the area slowly becomes too warm and increasingly unsuitable for the species, the activities that disturb the species’ suitable habitat are not likely to materially affect its survival, and unintentional take of the species will not endanger the species’ continued survival.

What does this mean for development projects in the region?

Northern Plains (NE and SD) and everywhere else

Development projects outside the Southern Plains Region are still subject to many of the same restrictions as before the 4(d) rule. Specifically, the rule prohibits incidental take in areas of suitable habitat resulting from physical and chemical soil disturbance; this includes grading, excavating, filling, topsoil stripping, ground/soil sterilizers, and pesticides that made the habitat not suitable. Incidental take is also prohibited if it results from changing the land use of suitable habitats, such as converting natural areas or pasture lands to croplands or urban sprawl. Notably, incidental take due to grazing or managing livestock is not prohibited; therefore, the primary livelihood of ranching in the region is unaffected. Therefore, private development projects that affect a suitable habitat for the beetle are still subject to seasonal surveys, avoidance and minimization measures, agency consultations, and possible mitigation for unavoidable impacts.

What this Status Change Means for the burying Beetles

The downlisting of the previously endangered species demonstrates reducing threats to this beetle species. This reduction means it is not currently in danger of extinction throughout all or a significant portion of its range. Still, it is likely to become so within the foreseeable future without continued protections. However, the species’ viability no longer warrants the broad range of conservation efforts previously afforded to it under the Endangered Species Act. The knowledge gained throughout its formal listing as an endangered species has allowed the agency responsible for its protection to issue reasonable measures for its continued conservation, which is good news for the insect and the industries that may affect its suitable habitat.

UPDATE: Conservation Status of and Regulations for the American Burying Beetle

The insect maintains its conservation status as a threatened species. Wildlife conservation groups, such as the Center for Biological Diversity, are likely to note if there is any change in the beetle population and push for review by the USFWS.

Efforts to repopulate the species, such as breeding the rare species at St Louis Zoo and the reintroduction to their habitat for some of these beetles by the Cincinnati Zoo, have played a role in saving the endangered American Burying Beetle. These conservation efforts, combined with the diligence of land developers to follow regulations, have led to the downlisting of this species. Maintaining the safety of this beetle is a small win, but we must monitor the species to ensure its survival. As more changes to these species occur, we will update you on the impacts on land developers.

Want to find out if your project is inside or outside of the American burying beetle 4(d) conservation areas?

Schedule a demo to learn more and get your first report free!