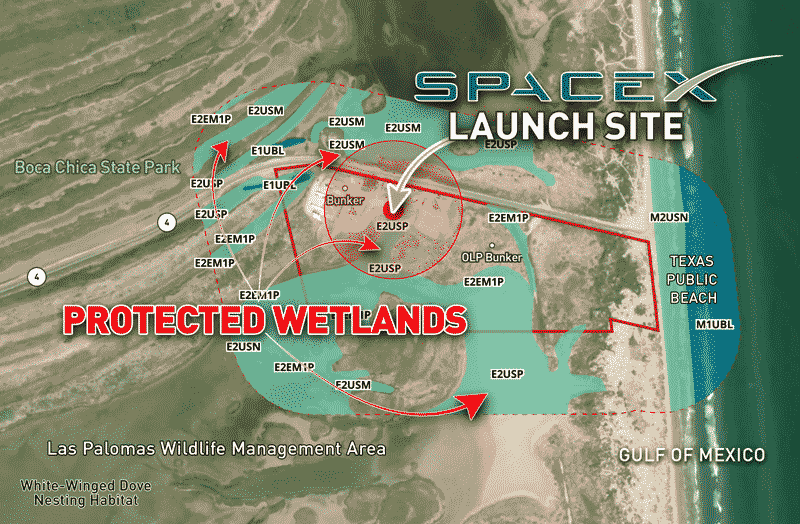 Space X is requesting liftoff to fill in acres of Texas wetlands, and environmentalists are striking back.

When they decided on the location for their launchpad in Boca Chica, Texas, it appeared only 3.3 acres of wetlands were proposed to be impacted as part of the construction, per their original Clean Water Act permit. Then, for their project expansion in 2015, SpaceX requested to fill an additional 2.2 acres of wetlands. Now, SpaceX wants to fill in an additional 17 acres of wetlands near the launch pad. This latest proposed expansion has drawn pushback from environmentalists because of the uncertainties that it could have on Gulf currents, nesting sea turtles, or other wildlife in the area.

There are several environmental red flags on the Boca Chica launch facility site. First, since SpaceX wanted to send rockets into space, the whole project is federally regulated by the Federal Aviation Administration, triggering an environmental review under the National Environmental Policy Act (NEPA). The NEPA process is an extensive, often years-long process. While NEPA review is required no matter where the project's location is, avoiding and minimizing environmental impacts is key to reducing the NEPA timeline.

One of those significant environmental impacts on the Boca Chica SpaceX facility is wetlands, which make up much of the facility’s land. Wetlands are regulated by the Clean Water Act and require extensive permitting and mitigation to be completed before construction. Secondly, these wetlands are home to migratory birds and endangered species. For a complicated project like this, minimizing impacts on environmentally sensitive resources like wetlands is key to overall project success.

Space X wants to modify their development permits to fill in these additional wetlands to get around these environmental barriers. However, environmentalists noted that this request lacked a mitigation plan to protect the environment from the domino effects of these actions. Without a mitigation plan, the potential damage to the surrounding waters, species, and communities would go unchecked. 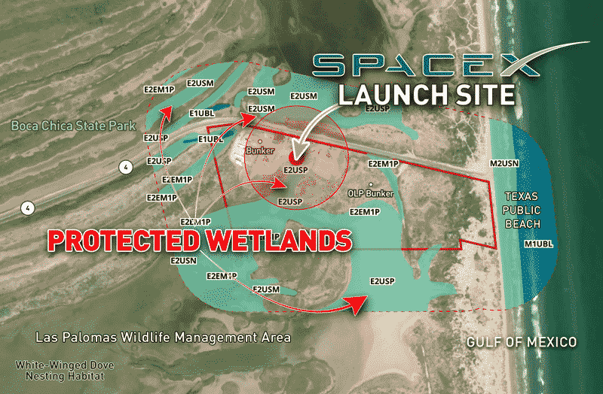 Because of the environmentally sensitive nature of the SpaceX site, the project has experienced substantial project delays while working through federal approvals. First is the matter of wetland mitigation. The United States Army Corps of Engineers (USACE), under the Clean Water Act Section 404, regulates dredge and fill in waters of the United States, which includes wetlands, and requires compensatory mitigation (i.e., no net loss of water resources) for most significant projects. SpaceX proposed several land transfers to the U.S. Fish and Wildlife Service as their form of mitigation. The transfer was supposed to be completed before construction kickoff. However, following 18 months of effort to complete the complex transaction with USFWS and months of construction delays, SpaceX had to ask the USACE to modify the mitigation plan entirely to transfer the land to a different public agency. This transfer is just one factor that has made this development process a road of hurdles.

SpaceX has had to delay the test mission for their Starship rocket scheduled for this July due to the need for additional FAA environmental reviews to ensure SpaceX is not harming wildlife around the South Texas launch pad.

We hate seeing projects delayed by unexpected environmental concerns that pop up on their site. There shouldn’t be an ultimatum between a quicker timeline and project success.

Why is Proper Site Selection Important

Poor site selection is known to lead to extensive project delays. When land developers sign a lease for a property they have never seen, they could potentially be signing up for unexpected delays and months of quality time with environmental consultants. As in the case of Space X, saving time signing a lease ASAP without seeing the property takes from your time and wallet later. Knowing what environmental risks are on your site before signing a lease or breaking ground means the development team can set realistic deadlines for project success.

How does Knowing the Risks Earlier Impact Land Developers?

Land developers put their projects and names on the line when selecting their site. Project stakeholders trust that land developers will choose a site that serves their best interest, and the developers believe their consultant will protect them from danger. Throwing a dart or money at a map and then praying it works is a path to project delays, not project success. When site selection follows this sit and pray method, mitigation efforts become expensive, environmental consults bill long hours, there are delays to the project schedule, and the development team becomes frustrated. In the case of Space X, there are loud demands for these mitigation efforts, and external forces, such as local citizens and environmental groups, meet their development dreams with backlash and disdain. Land developers shouldn't have to choose between losing out on a lease or sacrificing their name.

Environmental regulations apply to everyone and can affect any project site, but they don't have to be a deal killer. Having insight into environmental issues on your potential locations, understanding survey requirements, and anticipating permit timelines are crucial to meeting project goals.

Similar to GeoThinq, this software improves the site selection process with real-time data and the ability to compare project sites. Additionally, this tool provides an in-depth environmental report for a project site. Transect presents environmental data such as endangered species, critical habitats, waters and wetlands, soils, easy-to-understand concern levels for those site characteristics, a site-specific permit matrix, avoidance recommendations, and next steps. Users can even see a wetlands map or endangered species map for their project site. This insight allows land developers to see project risk before that risk is tied to money in the project budget. If SpaceX had utilized siting tools like this, they might have foreseen the additional wetlands they intend to fill.

Would SpaceX's Boca Chica launchpad location still be ideal if they knew all the roadblocks that came with it early on? Urgent development timelines or other project pressures often mean that land developers secure properties before genuinely understanding the environmental implications. The traditional way to conduct environmental due diligence (with hourly consulting) is slow and expensive.

Finding suitable sites doesn't have to be as complex or time-consuming as in the past.

While SpaceX may have the resources to adapt to permitting delays on their current project site, a site selection tool like could have saved them a significant amount of time and money. A location analysis could have found them the optimal site that met necessary project criteria but minimized their permitting and mitigation burden with these tools.

Situations like the one SpaceX currently faces are not uncommon. A key takeaway from stories like these is that what's good for the environment is also suitable for business. Finding a site that meets your project’s site selection criteria is good for developers and the environment. In the case of SpaceX, it would be suitable for the individuals living in the surrounding community too. The siting and permitting processes don't have to be hurdles in your project and don’t have to be a factor that leads to project failure. We know that identifying environmental risk and understanding how to navigate the permitting and timeline implications is critical to project success. We believe better siting decisions are the answer to achieving this success.

SpaceX has continued its project development while awaiting permission to fill in wetlands. During this time, more locals have expressed their distaste for the project. Many individuals and environmentalists feel the site does not follow what they were told the original land use was. Additionally, locals have noted a decrease in migratory bird nests throughout the duration of SpaceX’s construction process. Over time, a wide range of complaints from locals have been received. These complaints range from concern over rocket debris to noise complaints- for many of which SpaceX has refused to comment. The company’s development and expansion have disrupted many lives and is likely to continue doing so. Perhaps the backlash in this situation will serve as the incentive for even one project manager to make better siting decisions.